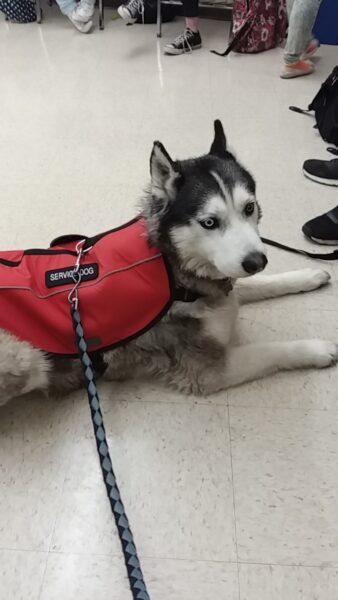 Trigger Warning: Talk about Self Harm, and Medical Issues

Everyone, meet Rocky! To me Rocky is not just a dog but a lifeline given to me at the time I needed him the most. Before he came to live with me Rocky was my oldest brother’s dog. Unfortunately, when my nephew was born they discovered he had a dog allergy. So my brother reached out to us to rehome Rocky.  My mom was reluctant because it was not the best timing with my siblings and even myself in crisis. I begged her, and she gave in saying the dog would be my responsibility.

At this point in my life I was suffering from chronic depression and anxiety, and being treated for self harm. Even though I was pretty stable I was struggling with constant thoughts of relapse and negativity. That day when my family went to pick up Rocky he came running to me. There were 5 of us but he chose me. Maybe he knew I needed him the most. I went to every vet appointment, walked him multiple times every day, fed him, and changed his water. He would bring me his favorite toys when I was feeling down and sleep next to my bed every night. The best part was I could rant to him about my problems without feeling judged…. because, well, he’s a dog. I needed him and he needed me, and being responsible for the life of another creature is what ultimately helped me get rid of my dark thoughts.  I even became more social and had friends over because I was excited to show everyone my dog.

But, it wasn’t over. At the start of my college education I struggled daily with weird neurological issues and pain. It took 2 years until I was finally diagnosed with an arachnoid cyst crushing my spinal cord, and in January 2020 I had surgery to remove it. Everything seemed great again until December 2020 when I started having the same symptoms again. More testing revealed that the cyst had grown back and was now even bigger, and that it was actually a rare case where it was fused with my spinal cord. This means that no matter how many times I have surgery it will eventually grow back. So after my second surgery in February 2021 I was told that it would probably come back in 5 years.

That night I cried and contemplated life again, but then Rocky came running up with his toy in his mouth and just dropped it in my lap and lay down next to me. He reminded me that I have him, a supportive family, and friends I can rely on to support me through these crazy struggles, and I finally felt content despite my situation. I realized that life is so valuable. Anything can happen at any time. Rocky reminds me every day to make the day positive and do something that makes me happy because life is so full of surprises. One surprise I got in August was that it didn’t take 5 years for my cyst to grow back. In fact, it only took a few months to grow to the point where I became debilitated and was unable to walk. So I just recently had my third surgery, and Rocky was right there to visit me in the hospital. We never know what tomorrow holds so let’s live this day as if it was our last.

Steph is a 21 year old Peer Support Specialist who works with Youth MOVE to share her story and help others overcome situations similar to hers.